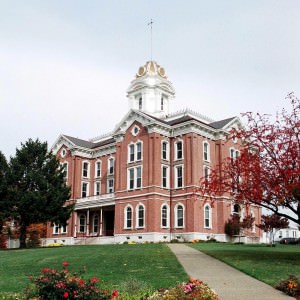 When Architura Corporation was first commissioned in 2003 to work on the Posey County Courthouse & Government Center in Mount Vernon, we were focusing on a CFF grant study that could allow the courthouse renovation to continue, while maintaining historic building preservation, and that would allow it to qualify for ADA and Life Safety issues. Once that phase of the project was complete, we then focused on architectural master planning that would incorporate many new and separate areas into the government center.

The master plan allowed room for county government offices for the Circuit Court, the Superior Court, clerks, auditors, the Treasurer, Recorder, Assessor, Commissioners, Prosecutors, jails, emergency operations, and both current and archived public storage. When these new areas were designed, they also had to be studied to see how the space could best be used to fit them all; how they would be used, and ensuring the design was efficient for that use; and we also had to allow room for these areas to grow and expand.

The renovation phase of the project required architectural and engineering plans that included renovations of over 25,000 square feet of the total courthouse and project land site. In order to make sure that the new structures adhered to current court standards, the holding cells that were added were made more secure; a sally port was added for the sheriff; and the government circulation systems had to be kept more secure. While the Posey County Courthouse was one of our largest projects, it was also one of our most exciting – it included master planning, historical building preservation, and renovation of a courthouse all in one!